In the early 1960s when aviation traffic started increasing, there were local people in Buffalo who were trying to obtain a local airport. Although there had been efforts made previously toward getting an airport in Buffalo there were greater priorities for other projects within the village. A few years later, a group of individuals and businesses gained village council approval for an airport. Meetings were held with Mn/DOT Aeronautics that resulted with Buffalo being placed on the priority list for 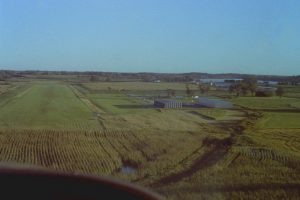 towns to get an airport. The Buffalo Municipal Airport was then opened in July of 1966 after the grass runway had been completed. The Flight Operations building was donated by the City.

Several local businesses and clubs donated money and material to remodel the old granary building. The Delta Flying Club installed a gas tank and was the first to sell fuel at the airport. During the 1970s Red (Baron) Anderson established his Red Baron Flying Service at the airport. Red was listed as airport supervisor and The Delta Club gave their gasoline business to Red as well. Red served his role as manager of the airport until 1986. In 1965, Wright County Aviation, Inc., was formed to raise funds to construct a 6-unit T-hangar. Thirty-six individuals purchased a $100 share, to cover the 20% down payment and Mn/Dot loaned the remaining 80% to be paid off after seven years. This hangar was donated to the City of Buffalo once it was paid off. A 2nd T-hangar was bought in 1979 much the way the 1st hangar was and was donated back to the City in 1990.

In the spring of 1980 Mn/DOT Aeronautics allocated money that was used to pave hard surfaces around the two T-hangars and taxiways to the north and middle entrances to the runway. With the help of many volunteers and donations a paved runway measuring 2600' x 60' was completed in the fall of 1986. The paving of the runway led to Buffalo Aviation opening their doors in the old operations building while construction of their 80' x 100' commercial hangar (this hangar is now owned by D'Shannon Aviation) was erected. Buffalo Aviation began hosting open houses/pancake breakfasts in the late 1980's that included championship aerobatic air shows. These open houses were held in June in conjunction with The City of Buffalo's annual event called Buffalo Days. Today, the Buffalo Municipal Fly-In Breakfast includes a car show and air show and is hosted by West Metro Aviation.

Formation of Airport Advisory Board 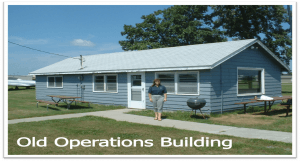 In 1985 the Buffalo Municipal Airport Advisory Board was formed. The board held monthly meetings and with help from Mn/DOT Aeronautics and the FAA an engineering firm was hired to assist the board with an Airport Layout Plan (ALP). The ALP was needed for the airport to become eligible for Federal funding for future construction plans at the airport. In the early 1990's, an ALP with a cross wind runway was adopted by the Advisory Board but it never came to fruition because of opposition to a longer runway. Many local citizens believed that the crosswind runway would be used for larger aircraft to land in Buffalo. In 1991 a third T-Hangar was erected through the Mn/DOT Aviations hangar loan program and additional taxiways were also paved.

In 2000 the Buffalo City Council, with recommendation from the Advisory Board, approved the development of a new ALP and Bolton and Menk engineering firm was hired to help with this project. The improvements outlined in the ALP were based primarily on the safety concerns for extension of the taxiway to the south and extension of the runway. Also in 2000, four private hangers began construction in a newly developed privately owned hangar area. The Advisory Board worked with City Council to change the zoning in this area so that private hangars could build more affordably on land that the City of Buffalo leases to the hangar owners.

Today, we have twenty-one privately owned hangars at the airport. In the fall of 2001 ground was broken for a 4th City owned T-Hangar that would be Buffalo's first hangar that would include individual stalls. This hangar was completed leased before construction began and the new tenants moved into the hangar in the fall of 2002. The fall of 2003 saw the installation of an Automated Weather Observation System (AWOS) by Mn/DOT Aeronautics and in June of 2005 a new fuel tank and automated system were installed on the west side of the apron.

The Advisory Board's next task was to replace the old operations building with a new Arrival/Departure (A/D) Building and discussions were ongoing over the 2004/2005 winter months after receiving the local portion of funds needed from the Buffalo Housing and Redevelopment Association (HRA). The new A/D building was completed in 2005/2006 and features a meeting room for 50, airport manager's office, 24/7 weather station, pilots lounge, kitchenette and restrooms. In March of 2007 the City was notified that the newly constructed A/D building would be receiving an Award of Excellence for design at the Minnesota Council of Airports annual symposium. In December of 2007 the Advisory Board started to develop yet another new ALP because of the speed of growth and interest at the airport. This new plan should take the airport through the year 2017. 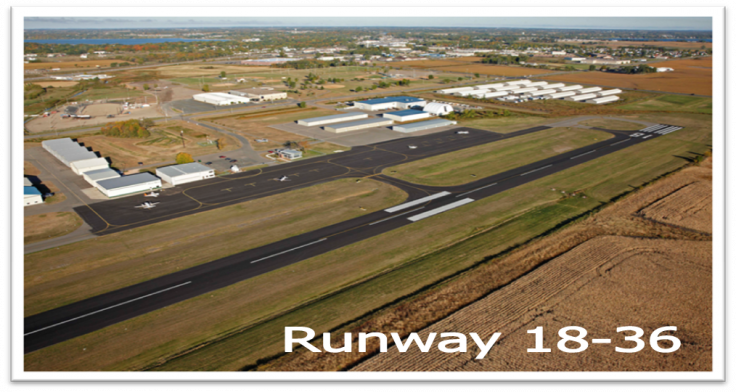 The Airport Board continued to work with Bolton and Menk, Mn/DOT Aeronautics and the FAA from 2007 to 2010 on the ALP. In early 2010, the Buffalo City Council passed the Airport Improvement Project that resulted in the runway being extended from 2600' to 3200', widened from 60 feet to 75 feet, new full length parallel taxiway, new runway pilot controlled lighting and PAPIs, larger ramp area, larger parking lot with new south and north access roads with security gates and new retention drainage ponds. The airport was shut down for approximately four weeks and reopened on September 3, 2010. In May of 2011 the Buffalo Municipal Airport was notified by the FAA that runway 17/35 would officially be changed to runway 18/36 starting in July because of changes in the polar magnetic shifts.